Posted in: RV Chemicals and Cleaners 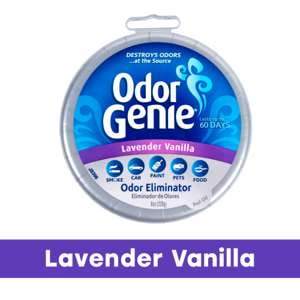 Odor Genie 8-ounce Odor Eliminator is your solution for fresher, odor-free air. Unlike some air fresheners that only mask odors, the unique formula of Odor Genie destroys tough odors at the source. It goes to work immediately after opening the container, neutralizing odors, creating fresher indoor air. Works great as a bathroom deodorizer, pet odor eliminator, or closet deodorizer, where odor is a problem. Easy to use, just remove the top label and place container in problem area. Discard in trash when Odor Genie is 10% of original size. Long-lasting freshness that lasts up to 60 days. Absorbs and eliminates many odors such as tobacco smoke, pet odors, paints/solvents/gasoline, kitchen odors, bathroom odors, trash odor, and musty odors. Best when used in areas approximately 300 square feet. This closet odor eliminator or pet odor absorber is available in Lavender Vanilla, Clean Meadows, and Wild Berry scents. Keep out of reach of children. Read and follow all label directions. 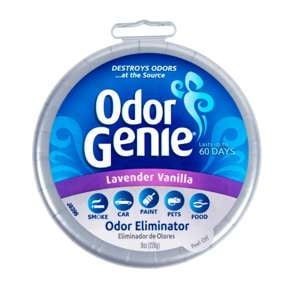 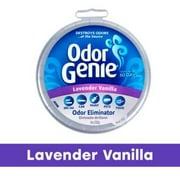 great smell
This product smells great, makes the room smell good, lasts quite a while, and I will probably buy some more.ponyboy7833

Do NOT follow this link or you will be banned from the site!